News > The Passing of a Polymath; in memory of Buzz Holling

C.S. 'Buzz' Holling passed away on August 16 2019. He lived a remarkable life of creativity, discovery, scholarship and service to humanity.

"the only way to approach such a period -- where uncertainty is very large and one cannot predict what the future holds - is not to predict, but to act inventively and exuberantly in diverse, adventures in living and experiment." CS Holling

C.S. 'Buzz' Holling passed away on August 16 2019. He lived a remarkable life of creativity, discovery, scholarship and service to humanity. He was a rare combination of artist, scientist, teacher and practitioner who touched and inspired many colleagues. One of his talents was an ability to bring people together to understand, assess and act on new solutions to complex problems of people and nature. Indeed, the Resilience Alliance was one of his 'experiments', set up as a flexible, nimble institution that would bring scientists, academics and practitioners together as a crucible for creating novel solutions that would contribute to sustainable futures for people and the planet. Since the RA and the scholarly journal Ecology and Society would not be here without Buzz, we hope to honor and memorialize his passing with a short (and inadequate) tribute to his life and many contributions.

The image above, shows Buzz touching a sculpture by his friend and colleague Lee Gass. The piece is a three-dimensional depiction of Buzz's adaptive cycle. The RA logo is a stylized depiction of the same heuristic or mental model which was derived from integrating and simplifying decades of ecosystem research. While appearing as an infinity or continuous loop, these representations stylize the abstract concepts of phases, discontinuities, non-linearities imbedded in the model. At the heart of the model is an overly simplified representation of systems (ecological, biological, social and biophysical) that change in different ways. In the model, change occurs as systems go through distinct periods or phases. First is growth and development of structure, capital and ideas. Over time the system becomes senescent and vulnerable to external influences, resulting in periods of destructive creation followed quickly by renewal into a new or different system. Buzz's life was indeed a series of adaptive cycles, as indicated by his memoir (Bubbles and Spirals).

Crawford Stanley Holling was born on December 6, 1930 in Elmira New York. He spent his formative years in Toronto and Ontario, where he collected bugs, watched birds and honed his naturalist's skills. His preferred name of Buzz was given to him by his older sister (short form of Buzzer) and it stuck through his life. Indeed, he insisted on being called Buzz throughout his life. He earned a BA and MSc at the University of Toronto in 1952. He traveled west and earned a PhD at the University of British Columbia in 1957. He began his career as a forest entomologist in the Canadian Dept. of Forestry in Ontario, where he built upon his PhD work on predator-prey interactions. Buzz was Professor and Director of the Institute of Animal Resource Ecology at UBC. He was the Director of the International Institute for Applied Systems Analysis in Vienna, Austria, before assuming a position as an Eminent Scholar, holding the Arthur R. Marshall Jr. Chair in Ecological Sciences in the Dept. of Zoology at the University of Florida. He retired from the University of Florida in 2000 but remained active as an Emeritus Scholar.

Buzz received many national and international awards over his professional career. He was elected as a Fellow of the Royal Society of Canada in Animal Biology in 1970. He received two honorary Doctor of Science degrees; one from the University of Guelph (1998), and another from UBC (2007). He was foreign member of the Royal Swedish Academy of Sciences and was also awarded the Austrian Cross of Honour for Arts and Science. The Ecological Society of America bestowed the Mercer Award in 1966 and an Eminent Ecologist Award in 1999. In 2008 he received the Volvo Environmental Prize.

A few years ago, as he was facing declining health, I shared an adage with Buzz: 'Yesterday is history and tomorrow is a mystery, but today is a gift--that is why it is called the present'. I think there are three reasons why this resonated with him. One is that I don't think he liked to reminisce and talk about the past, yet saw the value in applying historical information to recognize and explain patterns of change. Buzz embraced the uncertainty of the future, as indicated by his recognition of inherent complexity and unpredictability of the future, now manifest in the manifold resilience programs and the adoption of adaptive management throughout the world. Over the arc of his life, his leadership, friendship, support and ideas were gifts to those of us who were lucky enough to work with him. As we are now in the second or third generation of resilience scientists and practitioners, this provides us with the hope that his intellectual legacy will survive for years to come.

UPDATE: A Memorial fund for "Buzz" Holling has been established to support the ongoing engagement of Resilience Alliance young scholars (RAYS) in research network activities. Visit the Holling Fund page for more information. 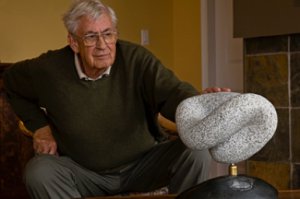